Feast of the Patron Saint and conference Municipal Police

San Sebastiano al Vesuvio – Officially started the celebrations dedicated to the patron saint: intense the weekly schedule of events. Tuesday 20, party calendar of San Sebastian Martyr, have followed the Mass inside the shrine city. At 12, the solemn Eucharistic celebration . A few hours before the city also celebrated “Patron Saint Sebastian Municipal Police” with a conference at the Middle School “Salvemini”. Present administrators and managers of the bodies of traffic police of Commons Vesuvians; Guests don Tonino Palmese and the Deputy Director of the Vatican Press Angelo Scelzo. To do the honors at the Mayor, The commander of the brigade and the local parish priest Father Enzo Cozzolino.

“The feast of St. Sebastian has become an occasion to take stock of the many problems common to all bodies of the Municipal Police – Gennaro explains Sallusto, regional president of the Association of Municipal Police Commanders – Increasingly auditors are forced to face the problems of crime in the territory with the help of the men directed the Municipal Police, that, although operating as a police force, still await a regulatory adjustment to work safely and in the best possible way”. In The Meantime, the streets have been set up the lights and the country is preparing to welcome thousands of pilgrims who arrive on the weekend. “Saturday night, from 19:30, will host the festival charity <<D'the zuffritte, sasicce and friarielli>> at the small shops of Piazza Belvedere – explains Don Enzo Cozzolino pastor of San Sebastian along with Monsignor Gaetano Borrelli – The event will raise funds for the families most in need of territorio.Durante the festival will be staging a play about the life of the patron saint made by the youth of the parish community. Afterwards we will hear a musical tribute to the beloved Pino Daniele by the choir of the Sanctuary. Sunday afternoon there will be then the traditional procession of the patron through the streets of the city. The parade will be open to hundreds of children in the hope that they can be the future guardians of our traditions”.

The path of the statue of Saint Sebastian ,departing at 15:30 and providing the same old seven stops to indicate the seven works of mercy, begins at the Shrine of Via Roma, Continue to Piazza Belvedere, Via Marconi, Via Maione, Via Parco del Sole, Via Luca Giordano, Via Daughter, Via Tufarelli, Viale delle Industrie, Via Zodiac, Via Astronaut, Via Monaco Aiello, Contrada Patacca, Via Amendola, Via Channel, Via Falconi, Via Margherita, Via Palmieri, Piazza San Domenico, Via A. Great, Via Rosselli, Via Garibaldi, Via Boccarusso, Via Piromallo, Piazza Belvedere. The parade will also touch the towns of Cercola, Herculaneum and Massa Somma.Al end of the procession of the statue of Saint Sebastian will be welcomed by Cardinal Sepe.

WEEKDAYS - VEROLINO INSTITUTE (With the Sisters) 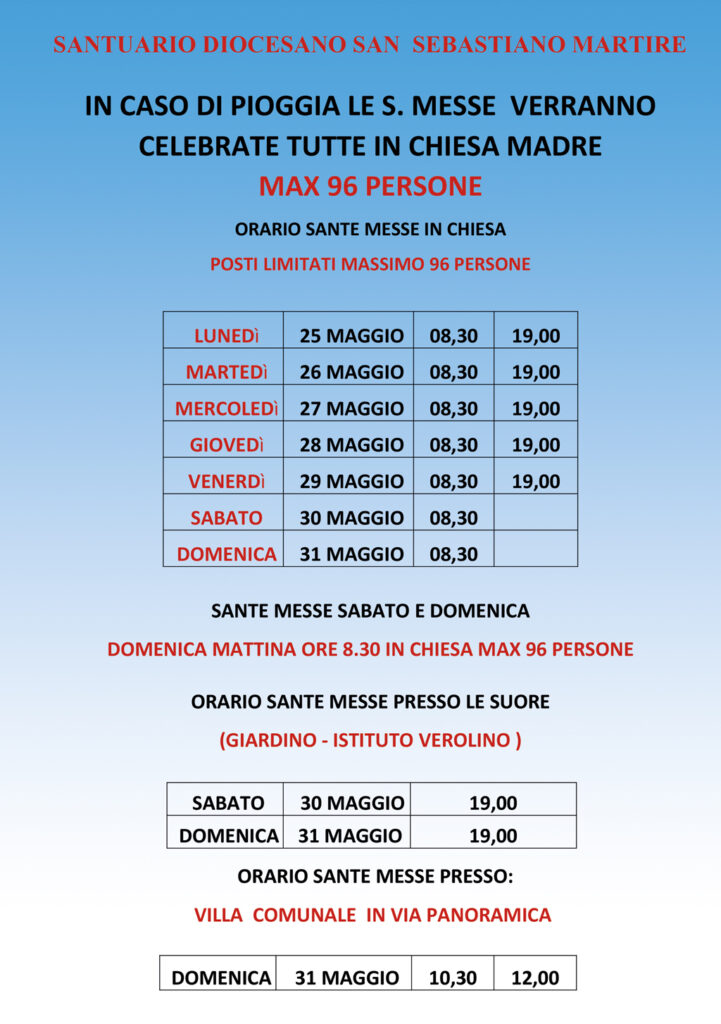 This website uses cookies to improve your experience while you navigate through the website. Out of these, the cookies that are categorized as necessary are stored on your browser as they are essential for the working of basic functionalities of the website. We also use third-party cookies that help us analyze and understand how you use this website. These cookies will be stored in your browser only with your consent. You also have the option to opt-out of these cookies. But opting out of some of these cookies may affect your browsing experience.
Necessary Sempre abilitato
Necessary cookies are absolutely essential for the website to function properly. This category only includes cookies that ensures basic functionalities and security features of the website. These cookies do not store any personal information.
Non-necessary
Any cookies that may not be particularly necessary for the website to function and is used specifically to collect user personal data via analytics, ads, other embedded contents are termed as non-necessary cookies. It is mandatory to procure user consent prior to running these cookies on your website.
ACCETTA E SALVA
Sanctuary of St. Sebastian Martyr